Please specify what fuse type you need on checkout.

The new Beeswax SHD fuse incorporates  a triple layer design with 2  new proprietary components to make the fuse even quieter with a better transfer of current and re location of the Bees Wax inside of the fuse for better stability.

Audio Magic latest fuse in the Premiere line – The “Beeswax” Premiere Super Fuse. The Beeswax version is identical to the Premiere version the only difference is Audio Magic uses Beeswax instead of the normal anti vibration fluid, this gives the fuse a very organic flavor but maintains the detail, dynamics and everything the Premier does. The production of this fuse is very difficult, very hard to get the Beeswax into the fuse but the organic sound is too good to ignore.

Much more detail top to bottom, wider and deeper soundstage, much better inner detail, layering, and a lot more air around instruments and voices. 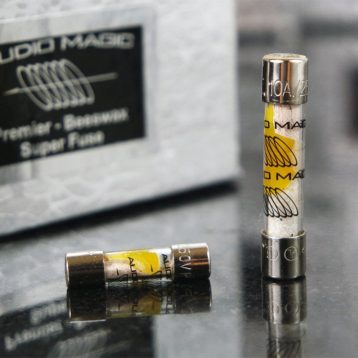